These ways of thinking about saying yes and no have helped me when I come across new opportunities and need to make a decision on what to focus on.

The stage of your life

The first framework related to saying yes and no comes from the great Derek Sivers. One of his most famous articles is his popularization of the Hell yeah or no principle, which states that if you have a choice to do something, and you don’t feel like it’s something that makes you say “Hell yeah”, then say no.

However, there is another principle that I learned from him related to saying yes and no depending on your stage in life, which he calls Switching Strategies. The way Derek Sivers sees it, is that in the beginning of your professional career, you need to prioritize saying yes as much as possible to open up the possibilities in your life. However, once you start seeing some traction (when you reach a point of success), that’s when you need to start saying no aggressively.

In this way, whether you say yes or no depends on what stage of your life you’re going through with regards to how much success you have. The more success you have, the more you should say no. 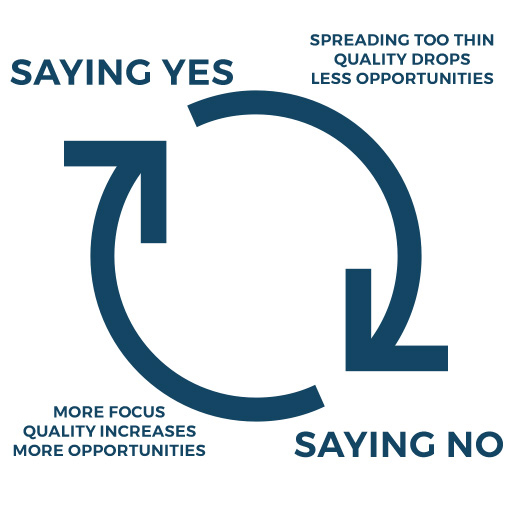 The next principle I want to go over is one that I call the cycle  (derived from Greg Mckeown). It goes like this.

1) Whenever you don’t have opportunities, you need to say yes to get more opportunities (since you’re not as picky and need to open the door to new possibilities).

2) Once you get more opportunities, you’ll say yes to some. If all goes well, and you deliver on what you said yes to, then that will lead to more opportunities (because of your reputation, productivity and confidence).

3) The problem is that if you keep saying yes, the areas in your life you previously said yes to, will eventually suffer due to a lack of focus.

4) That will lead to less opportunities (since you will start underdelivering on what you promised) or intentionally saying no because you simple don’t have time.

5) You then will have the choice to start saying yes more often to get more opportunities, and the cycle continues.

I found myself often repeating the cycle of taking on too many opportunities, and then having to say no more to renew my focus. Ideally you want to reach to a stage where you no longer have to enter the cycle, since you’ll be focused on the few things that are important and you can start saying no to almost all new opportunities.

Another framework in thinking about yes versus no is that from probably the most famous investor in the world Warren Buffet. There is a story that was attributed to him where he was having a chat with his pilot, and he asked him to write down the 25 most important things he wants to accomplish in his life. He told him to circle the top 5 out of the 25. He then said you need to avoid those bottom 20 like the plague until you accomplish those top 5.

Why? Because those other 20 are distractions.

No one has enough time to do every possible thing in life, so you have to prioritize, and those bottom 20 grey area goals are dangerous in terms of how they will distract you from the top 5 goals that you really want to get done. They are dangerous because they seem like things you want to do and are good, but if you want to be great you have to avoid them.

The final way to look at saying yes and no is to measure your opportunities on a long term / short term time scale. Naval Ravikant calls this Playing Long-term Games with Long-term People  That means that you want to say yes to long term opportunities and no to short term ones. The way that he recommends to do this, is to focus on longer terms projects and people that you wouldn’t mind working with for the rest of your life (or at least the next 10-20 years).

Anything that you deem as a short term opportunity is not worth your time, since it cannot give you enough traction in your life to develop the compounding positive effects that a long term relationship can (similar to how compound interest works).

Saying no is a muscle

A parting thought on this is if you struggle with saying no to opportunities (as I often do), remember that saying no is a muscle you need to exercise. What I started doing was, in addition to keeping track of my successes and to-dos is to also keep track of the things I say no to. That way I build the saying no muscle and it provides a balance to having a fear of missing out on new opportunities.

Want to stay in the loop? Enter your email below to join our community and we’ll let you know when we publish new articles.

13 Going On 30: Principles I Learned In Life

Posted on February 5, 2019December 1, 2021by Ahmad
As I enter the third decade of my life, I’ve noticed that there are certain principles or ideas that I’m starting to try and live my life by. By no means do I always live up to…
END_OF_DOCUMENT_TOKEN_TO_BE_REPLACED
Categories Mental Models

Posted on November 10, 2019December 1, 2021by Ahmad
It’s important to always want to learn, right? But should we have a limit to the amount of knowledge we take in? We were told since we were kids to “Seek knowledge from the cradle …
END_OF_DOCUMENT_TOKEN_TO_BE_REPLACED